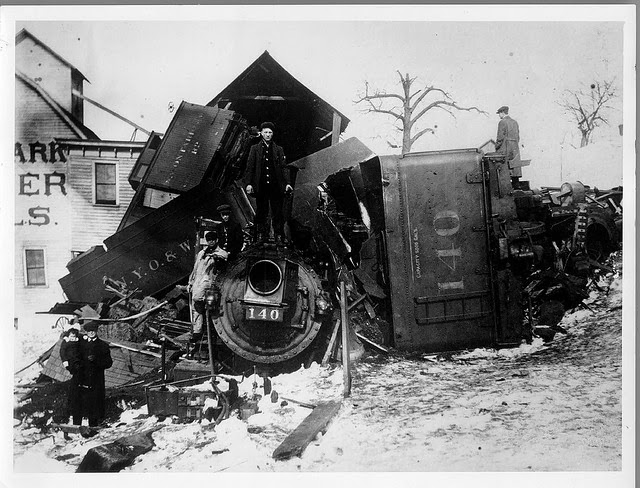 Watch the tracks ahead and be prepared to jump off if needed.

How can you tell if you have a real Mentor, or just a Celebrity Wannabe?

You want to find out if that person "helping" you is really doing this out of their own self-centered interests, rather than yours. Unless you are going to get a ton of personal good out of this, it may be that you're headed for a big de-railing at some point, with nothing to show for it except the trash left on the ruined tracks.

Too often, we find that following some of these "guru's" are no more than just another celebrity in guru's disguise.

I've experienced my fair share of these. Open-handed, helpful sharing is often stated as their motivation. But when you look deeper into the value they are delivering, you'll find that there is really nothing new in what they say. You can actually find this data in at least a dozen different books and several pages of Google search results.

The most recent profit-centered, self-promoting, self-oriented phrase I heard was "...to give without want." Sounds all noble and stuff. But you actually see how that person touts himself as an authority by stating he made all these millions within a few months and has this huge mailing list and now wants to share his special "insider information" with you.

Sounds great on paper. But it's just the same old hype. When you study how sales pages are made up, you start seeing these fakes all over the place. They are mostly all using the same "formula" to pitch you. Once you know that formula, you can spot the fake.

Here's how to work out if they are the real thing, or another glorified scam:


1. If they say they have a huge mailing list, then you know that they are already getting 1% of that to opt-in for whatever they pitch. It's a numbers racket. So that 1-million-name mailing list will give them an automatic 100,000 people signing up. Multiply that by whatever the price they give, and you'll see how much they will make from this "special insider" promotion. (Hint: they don't need your money.)

2. Does their email series contain the usual-pattern, hackneyed sales gimmicks? You know - authority, emotional appeal, limited offer, personal access, etc.? For those who know about the Product Launch Formula, you'll see a series of emails with videos only a couple days apart, spread over a week. The first is about some great data being released, the second is more about it, maybe with a survey, or survey results from the first one. The third is how it's a limited offer and why, the fourth is usually testimonials and why you need to buy now. Same format as the sales letter, only done over days with videos.

3. Real authorities don't use only a pat sales pitch or formula - they tell a story and give more valuable material than you could use before asking you for anything. Most of the time, the first video or installment will be their core data - and the extra value they give is in packaging it for you in other formats, such as DVD's and packs.

4. Do they hype themselves up as revolutionizing an industry? All by themselves? Look - no one got there sheerly by their own genius. The really humble industry leaders will make the story all about you - not them. They'll point out who else to follow, who else to look up, whose books they studied, what other materials and authors they recommend so you can speed your results (and not make the mistakes they did.) The fakes just say "buy MY books, packs, DVD's, and especially MY monthly payment plan." (As if they are the only one with The Solution You Need.)

5. How are they getting paid from all this? How are they going to deliver it? It's been established that a single person can influence or help only about 250 people directly. If they are saying "coaching", that's the limit. And they won't be doing anything else, such as running a business empire. Keeping track of that many people - and actually helping them - is a full-time occupation. If they are getting a monthly residual payment, and just send you a course-pack and some weekly emails, they've just sold you a typical, usual offer. That's not coaching, even if it's an acceptable form of training.

6. Do they push you on having a lifestyle with lots of *stuff* around you - like big homes, fancy cars, expensive trips? This is saying that you are a sucker for stuff you will probably never actually have, and so - like a moth to a light - are drawn forever toward them.


How did your "guru" do in this checklist?

You see, the bottom line is that it's still all about them, not you.

They are the ones who have unfilled needs: the need for approval, for personal adoration of devoted fans. It's a celebrity scene that they are stuck in.

They are exploiting your emotions and your "excess" spendable income so you can pay them for a few hours spent in front of a video camera, plus someone else creating their course packs and other materials.

The only one who is ever going to make you rich is you. The only way you're going to become successful is to change your mind and devote yourself to your own vision.

In any age on this planet, millionaires and billionaires got that way because they thought and acted differently than the rest of the million or billion people out there. (See the classic "Millionaire Next Door" by Thomas J. Stanley.) Change your mind, change your results.

Someone else's plan, blueprint, system - these won't work unless you can tailor them to your own scene. The Internet Marketing Guru's all got rich mostly by selling what used to work, using examples of a tiny handful to say that anyone can do this. Once they found how this "secret," the search engine algorithms or government laws were changed to close that loophole. That's why they are constantly coming out with new "systems" and tricks. Real mentors just keep promoting the same workable scene they've evolved based on studying reall people really applying it in real life.

Study the back-trail of these people and you can work out what they did to make their own success. Usually, it's getting a bunch of joint-venture partners with big lists who can promote their product for a hefty split of the profits (aka "commission.") Then they have all these guy's list all rolled into one massive one. (Yes, those big joint-venture guys built their own lists the same way.)

This is one reason I've taken to finding dead authors and republishing their works. This gets you out of the fads and the celebrities with their personal magnetism. The stuff that they used still works in our Internet Age. What still works is based on Natural Laws, not tricks and sleight-of-hand or an outright scam.

I've gone through a few of the Big Name types recently and found that this was their common scheme - they were wanting you to become a "supporting member" of theirs, so they could continue to live their own "lifestyle of the rich and famous." All on your back. All while you keep your day job and pay your own bills - plus your "fair share" of theirs.

Consumerism is the key way to find these guys (and gals) out. They push you into constantly wanting and buying more stuff in your life. Consumers consume things - load up their home with bookshelves of materials they can't use. Or sign up for an auto-ship of stuff to eat or use up. "For only one low monthly payment."

They aren't pushing you into changing the one thing which should be providing you with solutions to any perceived "lack" you may be experiencing - Your Mind.

Here's some people you can follow for free or nothing (note: no links here) -

Napoleon Hill - Interviewed over 500 world leaders over 20 years, and distilled their personal secrets to success into a single philosophy of success anyone can apply. You can get his book for around $4 - and even free.

Earl Nightingale - made his living researching and teaching others how to use self-help techniques in their lives. Made several fortunes just helping people. Known for his "Our Changing World" free radio program. Sure, Nightingale-Conant offers courses and packs of his content, as well as others. They're all one-shot purchases, and have proved themselves many times over.

Dale Carnegie - known for his bestseller books, which came from his World Record of critiquing more speeches than any other person in history. Boiling down what it took to train these speakers gave the common denominators which became books.

There are also Charles Haanel, Wallace Wattles, Genevieve Behrend and her mentor Thomas Troward. Also Dorothea Brande and Claude Bristol, William Walker Atkinson (and his many aliases), Robert Collier - tons of these writers, which you can get versions of their books for little or no cost (other than bandwidth.)

Yes, I am working to re-publish these and create training courses from them again, as well as ebooks for our modern smartphones, tablets, and phablets. That is just adding value. (The copies found in the Internet Wild are not always the best presentations or the most readable...)

The point is to give you more choice, not just harness you up in yet another chain of mules or horses pulling someone else's freight-wagon.

What do you think?

P.S. The reason for this post is that I've been studying some of the long-dead copywriting Masters - and they didn't use what is in common use today, and what is giving advertising in general its well-deserved bad reputation... More about this later.

[Update: This  "guru" has 4500 surveys returned (out of his vaunted 1 million email list) and is going to give "1 year" of "unprecedented access" with him so he can "personally work" with these guys over the next year. Sorry - he's on a celebrity swing of how important he is. The trick with money is that is only makes you more of what you already are. An ass just gets bigger, for instance...]

Posted by robertworstell at 3:31 PM